Welcome to Music Friday when we bring you super throwback songs with jewelry, gemstones or precious metals in the title or lyrics. Today, Mick Jagger and The Rolling Stones shine the spotlight on diamonds in their timeless tune, “Play With Fire.” 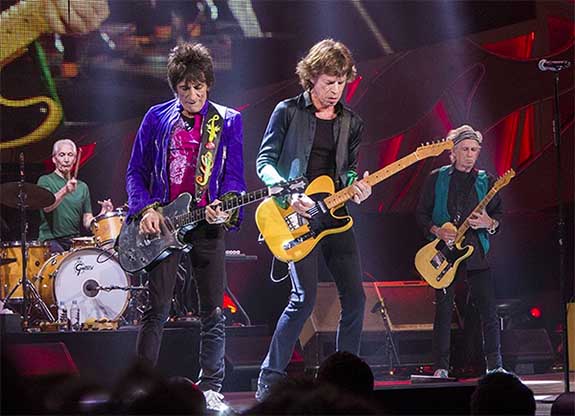 A song that takes a critical look at the lifestyle of Jagger’s high-society girlfriend, “Play With Fire” starts off with the line, “Well, you’ve got your diamonds and you’ve got your pretty clothes / And the chauffeur drives your car / You let everybody know / But don’t play with me, ’cause you’re playing with fire.”

Jagger warns his girlfriend that even though she enjoys a privileged lifestyle, she could get burned and lose it all.

“Play With Fire” is officially credited to Nanker Phelge, the pseudonym used when the whole band collaborated on a track, but SongFacts.com reports that lead singer Jagger and guitarist Keith Richards were the only band members awake when the song was recorded very late one night at RCA Studios in January of 1965.

“I mean, it’s a very in-your-face kind of sound and very clearly done,” Jagger said. “You can hear all the vocal stuff on it. And I’m playing the tambourines, the vocal line. You know, it’s very pretty.”

Relegated to the B-side of their single, “The Last Time,” “Play With Fire” met with only marginal commercial success. It topped out at #96 on the U.S. Billboard Hot 100. Despite that lukewarm reception, the song has stood the test of time.

The Stones seemed to have a fondness for the song, as it was performed in concerts during 1965 and 1966, and then revived more than two decades later when the band toured in 1989 and 1990.

Original band members Jagger, Richards and drummer Charlie Watts are still performing in their 56th year together. The group has released 30 studio albums, 23 live albums and numerous compilations. Overall, The Rolling Stones are credited with more than 250 million album sales. They are members of the Rock and Roll Hall of Fame and were ranked fourth on Rolling Stone magazine’s list of the “100 Greatest Artists of All Time.”

We hope you enjoy the original audio track of The Rolling Stones performing “Play With Fire.” The lyrics are below if you’d like to sing along.

Well, you’ve got your diamonds and you’ve got your pretty clothes
And the chauffeur drives your car
You let everybody know
But don’t play with me, ’cause you’re playing with fire

Your mother she’s an heiress, owns a block in Saint John’s Wood
And your father’d be there with her
If he only could
But don’t play with me, ’cause you’re playing with fire

Your old man took her diamonds and tiaras by the score
Now she gets her kicks in Stepney
Not in Knightsbridge anymore
So don’t play with me, ’cause you’re playing with fire