Back in the late 1950s, TV advertising pioneer Rosser Reeves purchased an unmounted star ruby and carried it in his pocket for good luck. 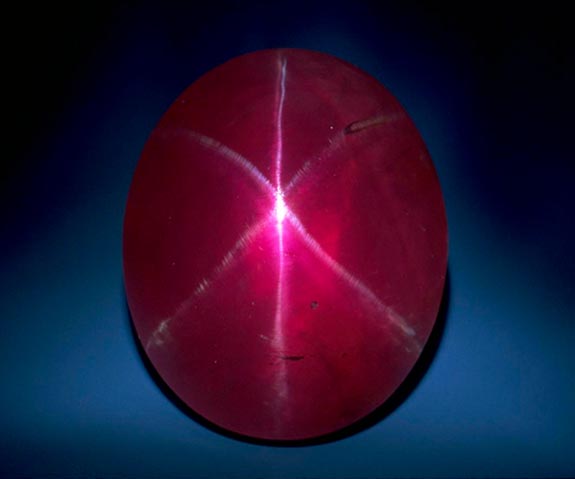 This was no ordinary ruby. With its rich red color and well-defined star, the 138.72-carat ruby was said to be the largest and finest star ruby the world has ever known.

He called the stone “my baby” and protected it in a small velvet pouch. Today, we call it the “Rosser Reeves Star Ruby.”

The advertising executive, who penned the M&Ms slogan, “Melts in your mouth, not in your hand,” was one of the most successful admen of his day. And he attributed much of his good luck to the beautiful scarlet stone.

One day in the early 1960s, Reeves took a taxi to New York’s JFK Airport to connect with a flight to London. When Reeves arrived at Heathrow Airport, he realized that his “good luck” ruby had been left behind in the cab.

“He called the taxi company, and luckily, the driver had turned in the pouch,” recounted Brendan Reeves, the advertising giant’s great-grandson, at geogallery.si.edu. “After that harrowing experience, Reeves donated the ruby to the Smithsonian Institution.”

Since 1965, the cabochon-cut Rosser Reeves Star Ruby has been one of the most prized possessions of the Smithsonian National Museum of Natural History in Washington, DC. It can be seen near the Hope Diamond and Logan Sapphire at the Janet Annenberg Hooker Hall of Geology, Gems and Minerals.

The famous ruby has an origin of Sri Lanka although it’s not clear when it was mined. According to published reports, gem dealer Robert Fisher purchased the stone at a London auction in 1953. At the time, it weighed 140 carats, but the asterism in the stone was slightly off center and the surface had abrasions.

It was subsequently cut down to 138.72 carats to give it a prettier appearance and bring the “star” closer to the center. The ruby had become so famous in its own right that it had been the subject of stories in the New York World-Telegram and The Sun as early as 1953.

Although Reeves — who passed away in 1984 at the age of 74 — often stated that he bought the stone at an auction in Istanbul in the mid-1950s, he actually purchased the recut stone from Fisher’s son, Paul, in the late 1950s.

The asterism is caused by titanium trapped in the corundum while the crystal is forming. As the crystal cools, the titanium orients itself as needle-like structures in three directions. A cabochon cut, with a smooth, rounded surface, allows the light to reflect off the titanium and give the appearance of a six-legged star.

Ruby is the official birthstone for the month of July.