Once Owned by Catherine the Great, ‘The Sleeping Lion’ Pearl Hits Auction Block This Week

Once owned by Catherine the Great, the world’s largest known freshwater blister pearl is expected to fetch more than $600,000 when it hits the auction block in The Netherlands this Thursday. 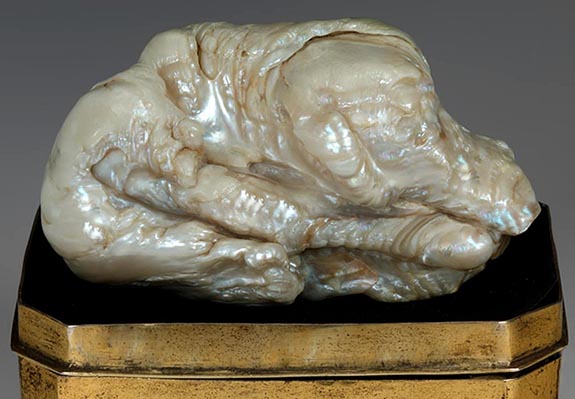 Dubbed “The Sleeping Lion” due to its unusual shape, the extraordinary quarter-pound natural pearl is more than 2.7 inches long and was likely formed in China between 1700 and 1760.

For approximately 250 years, the pearl has traveled the world as it changed hands among global merchants, noble jewelers and European royals.

According to the Venduehuis auction house, The Sleeping Lion was found in southeastern China — perhaps in the Pearl River — during the Qing dynasty. And even though Chinese Emperor Qianlong enforced a ban on exporting large pearls, The Sleeping Lion was moved by Dutch merchants to Batavia and then to Europe.

In 1765, Hendrik Coenraad Sander, the accountant for the Dutch East India Company, became the first European owner of The Sleeping Lion. After his death, the pearl was auctioned off in Amsterdam in 1778 and acquired by Catherine the Great. The Empress of Russia placed the piece in the Hermitage Museum in St. Petersburg, where it was on public display until 1796.

In 1865, Lodewijk Willem van Kooten, a goldsmith working for the Italian court jeweler, Catellani, purchased The Sleeping Lion and brought it to Amsterdam two years later. For the next four generations, the pearl would remain in the possession of the prestigious Dutch jewelry family.

The Amsterdam Pearl Society purchased the pearl in 1979 with the goal of researching The Sleeping Lion’s composition and history. On Thursday, the Society will be offering the pearl for sale during the Venduehuis auction in The Hague. The Venduehuis der Notarissen is the oldest Dutch auction house, founded in 1812.

The Sleeping Lion is considered a blister pearl, which means that it formed while attached to the inside surface of a mollusk’s shell. This causes blister pearls to be flat on one side. 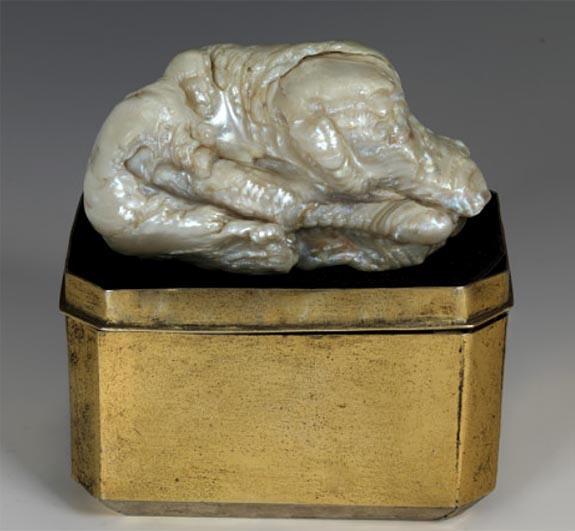 Coming off a three-day viewing in The Hague, The Sleeping Lion will be Lot 1778 at Thursday’s auction. Venduehuis estimated the piece would sell in the range of $395,000 to $628,000. The pearl is being offered along with its original custom-made brass case.