As we breathlessly await the mid-June reveal of the New England Patriots’ Super Bowl LIII ring — a ring that promises to be the biggest and blingiest championship ring ever designed — we just learned that a super-rare Patriots Super Bowl LI ring is up for grabs at Heritage Auctions. 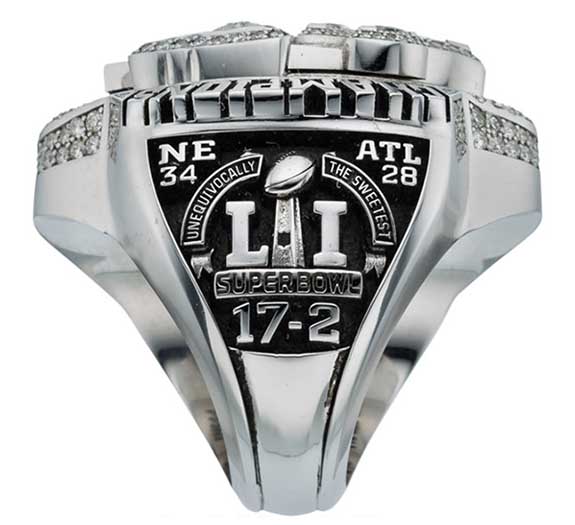 What makes this auction so intriguing is the fact that the player selling the ring has demanded anonymity. All we can say for sure is that he boasts a ring size of 14.5.

“The word ‘massive’ doesn’t even begin to describe this eye-catching stunner, but, to be fair, five Lombardi Trophies take up a decent amount of space,” noted Heritage Auctions on its official website. “It’s ostentatious enough to make a rapper blush, heavy enough to send a strong swimmer to the bottom of the lake.” 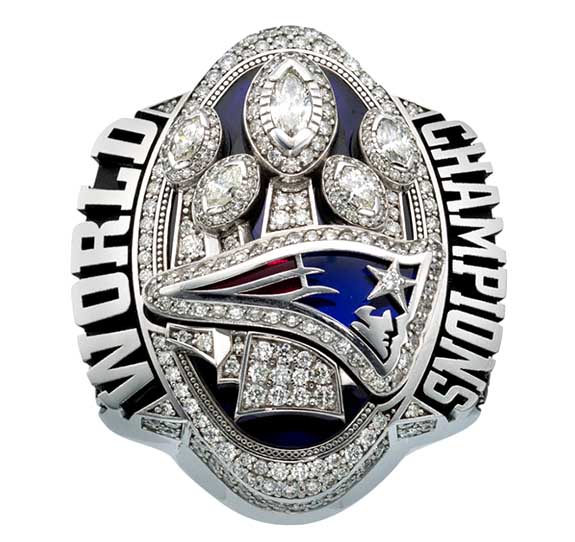 Hyperbole aside, the ring actually weighs just under a quarter pound (105 grams) and is a adorned with 283 diamonds, representing the greatest comeback in Super Bowl history. The Patriots overcame a 28-3 deficit to win 34-28 in overtime. The width of the ring’s decorative face is 1.5 inches.

“This one’s definitely a special ring,” Chris Nerat, Heritage Auctions’ football memorabilia expert, told bostonherald.com. “To my knowledge, it’s the first and only player’s ring from that Super Bowl [to be offered for sale].”

When the Super Bowl LI ring was originally unveiled in June of 2017, Patriots owner Robert Kraft said, “It was a historic comeback win and the players deserve to have a ring that represents that accomplishment. So, we created the biggest Super Bowl ring ever made.”

On the right side of the ring, the Super Bowl LI logo is highlighted with the game’s final score at the top and the team’s 17-2 overall record at the bottom. Framing the side is Kraft’s famous postgame comment that this Super Bowl victory was “UNEQUIVOCALLY THE SWEETEST.”

The left side of the ring has the recipient’s name and number encrusted with diamonds. An image of the lighthouse and bridge, which form Gillette Stadium’s signature view, are accented with the years of each of the Patriots’ previous Super Bowl victories.

Two additional elements are hidden on the inside of the ring. One is Kraft’s memorable quote, “WE ARE ALL PATRIOTS,” along with his signature and the date when he first delivered that line. A second element reads, “GREATEST COMEBACK EVER.”

With the Patriots winning their sixth Super Bowl this past February, it’s very likely that the Super Bowl LI rings will be overshadowed by their Super Bowl LIII counterparts. Can Jostens actually fit more than 283 diamonds on a ring? Can a ring reasonably weigh much more than 105 grams? Time will tell.

Meanwhile, Heritage Auctions has set the value of the auctioned Super Bowl LI ring at $60,000 and up. As of Thursday morning, the highest bid was $42,000, although some experts believe the offers could get into the six figures by the time online bidding closes on May 16. The Dallas-based auction house will also host live sessions on May 16 and 17. The ID of the seller will only be revealed after the sale is final.

Few NFL players have the star power of Pats quarterback Tom Brady, who hardly ever puts his awards up for sale. In February of 2018, a non-player “family” version of Brady’s Super Bowl LI ring (one with 265 diamonds instead of 283) was sold by Goldin Auctions for a startling $344,927. Both the seller and the buyer of that ring remain anonymous.