It was in the late 1960s when the marketing team at Tiffany & Co. got its first peek at a stunning new gemstone. The intense blue-violet gem had been discovered in the foothills of Mount Kilimanjaro in Tanzania by a Maasai tribesman named Jumanne Ngoma. At first glance, the specimens appeared to be sapphires, but the Gemological Institute of America revealed that the crystals were a never-before-seen variety of zoisite. 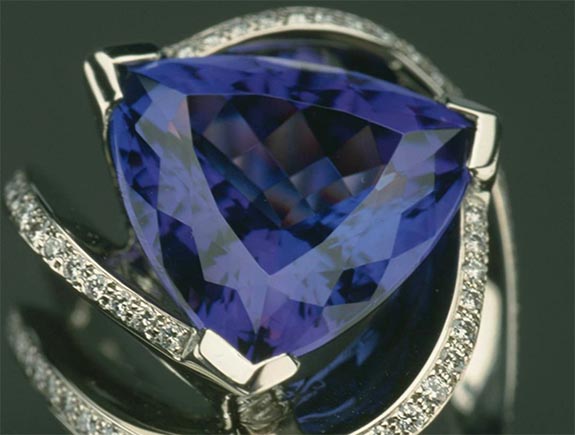 Tiffany wanted to feature the gemstone in a broad-based advertising campaign, but the marketing team had to overcome a huge hurdle. The name “blue zoisite” sounded very much like “blue suicide” — and that alone could have tanked the campaign. So, the team at Tiffany decided to promote the gems as “tanzanite,” a name that would honor their country of origin.

Tiffany’s marketing campaign succeeded in making tanzanite a household name and earned it the title of “Gem of the 20th Century.”

Tanzanite is said to be 1,000 times more rare than diamonds due the fact that tanzanite is mined in only one location on earth. The area measures 2km wide by 4km long and the remaining lifespan of the mine is less than 30 years.

Despite tanzanite’s commercial success, Ngoma had never reaped any financial gains from his discovery.

In 2018, Asha Ngoma made a desperate plea to Tanzanian President John Magufuli on behalf of her nearly 80-year-old dad, who was ill and partially paralyzed. The President responded with a reward and well deserved words of praise.

“Mr. Ngoma is a veritable Tanzanian hero,” Magufuli told The Citizen. “But what did he get after discovering tanzanite about 50 years ago? Nothing. Nothing at all. In fact, it is people from other countries who have benefited more from this unique gemstone.”

Magufuli announced that Ngoma would be receiving 100 million shillings (about $44,000) from the Tanzanian government. That amount is nearly twice the average annual salary for a Tanzanian.

Tanzanite’s color is an intoxicating mix of blue and purple, unlike any other gemstone. The mineral comes in a wide range of hues, from light blues or lilacs, to deep indigos and violets. The most valuable tanzanite gemstones display a deep sapphire blue color with highlights of intense violet. The Smithsonian’s website explains that tanzanite exhibits the optical phenomenon of pleochroism, appearing intense blue, violet or red, depending on the direction through which the crystal is viewed.

A Maasai folktale recounts how tanzanite came to be. Once upon a time, the story goes, lightning struck the foothills of Mount Kilimanjaro, scorching the land. In the aftermath, a spectacular blue crystal was left shimmering in the ashes.

Tanzanite rates a 6.5 to 7 on the Mohs hardness scale. By comparison, diamond rates a 10 and sapphire rates a 9.

Illustrating this story is a beautiful 12.11-carat, trillion-cut tanzanite set in an award-winning platinum ring by Mark Schneider. The designer and his wife, Nancy, gifted the piece to the Smithsonian in 2001, making it the first tanzanite jewelry accessioned into the National Gem Collection.