Pop star Katy Perry announced her Valentine’s Day engagement to Lord of the Rings alum Orlando Bloom with an Instagram selfie showing off a ring with a deep pink center stone in a flower-shaped diamond cluster setting. 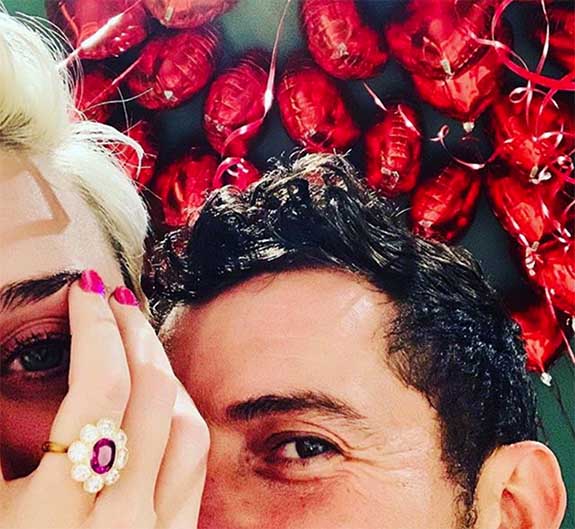 Both Perry, 34, and Bloom, 44, featured the photo on their Instagram pages. Perry’s was cleverly captioned “full bloom” and Bloom’s was titled “Lifetimes.”

Bloom picked an unusual, fanciful, Edwardian-inspired ring for Perry, who is famous for her colorful style and sometimes-outrageous fashion choices.

Perry and Bloom have yet to confirm the identity of the oval-shaped center stone. Some pundits believe it’s a ruby, while others are calling it a pink sapphire, or a pink diamond.

That’s why the same experts have offered a wide range of retail values — from $25,000 to $5 million.

Antique jewelry expert Stephen Feuerman told harpersbazaar.com that Perry’s new engagement ring reflects a cluster style that first became popular at the turn of the last century. Since then, the style has been revived in a number of famous engagement rings, including the blue sapphire and diamond ring that Prince Charles presented to Princess Diana. More recently, Princess Eugenie’s engagement ring featured a cluster setting with a padparadscha sapphire at its center.

This will be the second marriage for both Perry and Bloom. The pop star tied the knot with actor Russell Brand in 2010, the same year Bloom married supermodel Miranda Kerr.

People.com pointed out that Bloom seems to have a fondness for cluster-style engagement rings. The ring he gave to Kerr was similar to Perry’s, except that Kerr’s had a diamond center stone and was set in white metal. Perry’s has a colorful center stone and is set in yellow gold.