Not Again! NYPD Rescues Another Engagement Ring From Utility Grate in Midtown

For the second time in five weeks, the New York City Police Department has rescued a diamond engagement ring from a utility grate near Times Square. 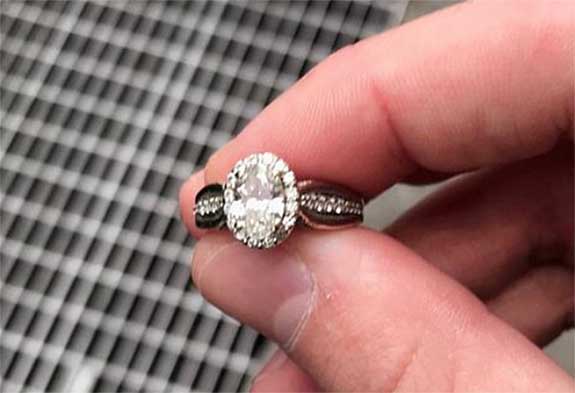 The metal grates, which were once famous for consuming spiked heels and small change, are now menacing bridal jewelry at an alarming rate.

The NYPD went as far as to send out this tongue-in-cheek public service announcement via its Twitter page: “PSA: Attention all newly engaged! Please avoid sewer grates at all cost! Thank you.”

Back in early December, a British couple became international celebrities after a video of them losing their engagement ring down a utility grate in Times Square went viral.

The couple reportedly flagged down police officers on the night of the incident, but they were not able to access the ring in the darkness. The couple returned to the UK the next day without filing a police report or providing their contact information.

The NYPD was not about to give up the search, however, and detectives were back at the scene the next day, descending into the muck eight feet below the sidewalk to rescue the ring. The NYPD used its Twitter account to locate the couple, and within 24 hours they were found.

Two weeks later the couple was invited back to the U.S. to appear on the Ellen show, where they were not only reunited with their engagement ring, but also got to meet the hero detectives who found it. The show also gifted the couple $10,000 as a wedding gift.

On January 5, the Twitter account for NYPD Midtown North was buzzing with more news about an engagement ring that was rescued from a utility grate at 48th Street and 8th Avenue, just a block from Times Square. The post — which includes a photo of an oval diamond in a halo setting — gives credit for the recovery to the NYPD’s Neighborhood Coordinating Officers (NCOs), Emergency Service Unit (ESU) and the Fire Department of New York City (FDNY).

In a tweet that begins with a blue diamond engagement ring emoji, the department wrote: “Ring in the new year & you won’t believe it — it fell down a sewer grate. It’s the first engagement ring we recovered in 2019. NCO’s along with ESU & FDNY were able to retrieve the ring. Sound familiar? Well this time we gave it back at the scene in lieu of the @TheEllenShow.”

Unlike the British couple who reveled in their new-found fame, the woman who lost her ring at 48th Street requested to remain anonymous.