Bill Wadel, now retired and living in Spotsylvania County, Va., was spectacularly reunited with his high school class ring — a ring that had been lost at the bottom of a pond for nearly 60 years. “What are the odds?” he said. 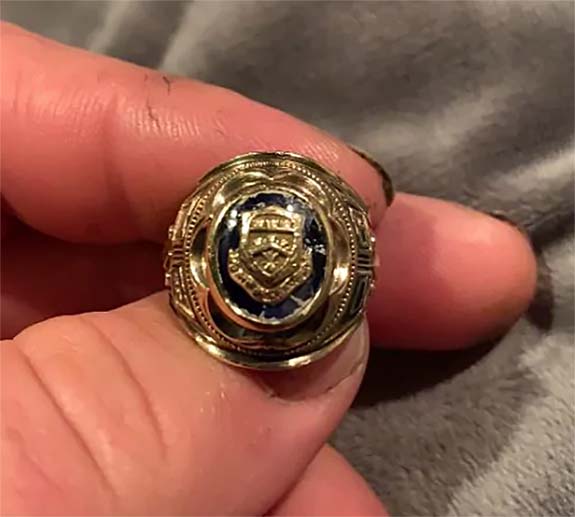 When Wadel was a student at Gate of Heaven High School in South Boston, he had purchased a Class of 1960 class ring adorned with a blue stone and a gold crest. Instead of wearing it himself, he chose to give it to his high school sweetheart. Within a short time, the ring had vanished.

“She somehow lost it, but wasn’t sure where,” Wadel told washingtonpost.com. “After that happened, I figured it was gone forever.”

Fast-forward to June 2019 and treasure hunter Luke Berube is trolling a shallow pond about an hour from his home near Cape Cod, Mass. He gets a strong signal on his metal detector and descends 10 feet to the bottom to take a closer look. With the location pinpointed, he pushes his hand about five inches into the muck and pulls out a Gate of Heaven class ring etched with the initials WJW.

During his 13 years of scuba diving, the 29-year-old metal detector enthusiast has located more than 400 items. He’s found rare coins, precious jewelry and historical artifacts. He also unearths a lot of junky items, such as old beer cans, pop tops and chunks of metal.

Often, Berube is not able to identify the owner of an item because the jewelry does not provide enough clues. But, in the case of the Gate of Heaven class ring, he had sufficient info to do some sleuthing. Berube soon learned that the Gate of Heaven school in South Boston had closed in 2009, but there was still an active alumni page on Facebook.

On the Gate of Heaven Facebook page, Berube posted three photos of the ring and wrote, “Hello everyone. I’m curious to know if there is anyone on here from the class of 1960 or at least 59-61 who may know of someone from the class with the initials WJW. Saturday morning I was scuba diving with my metal detector and I just happened to come across a class ring with Gate of Heaven on the crest with WJW as the inscription. If you happen to know who this may be, please reach out to me through FB or by phone.”

According to washingtonpost.com, the Facebook strategy worked exactly as planned. Within hours, Berube received a text message from Christine Wadel of North Attleboro, Mass. The daughter of Bill confirmed that her dad was, indeed, a 1960 Gate of Heaven graduate. The WJW initials were his: William Joseph Wadel.

“It’s unbelievable to think that my old ring was sitting in a pond for six decades and Luke found it,” Wadel told washingtonpost.com. “What are the odds?”

Christine placed the class ring in a decorative box and presented it to her dad. He sported an ear-to-ear grin as he tried it on for the first time in 60 years. It barely fit on his pinky.

Then Bill brought the story full circle by giving the ring to his current sweetheart, Pam, his wife of nearly 50 years.

“I looked at my wife and said, ‘You want it?’ and she put it on her pinkie finger,” he said.

“Every ring has a story attached to it,” Berube said. “The truth is, I just enjoy looking for them.”

Berube is a member of The Ring Finders, a group of metal-detector enthusiasts located throughout the U.S. and Canada. To date, the group that prides itself on reuniting precious keepsakes with their rightful owners has claimed 5,543 recoveries valued at $7.5 million.