A fascinating phenomenon in the world of precious gemstones is the way alexandrite changes color under various light sources. The “Whitney Alexandrite,” which is on display at the National Museum of Natural History in Washington, D.C., is one of the world’s largest and finest examples of the color-change mineral from the chrysoberyl family. Alexandrite is also one of the three official birthstones for the month of June. The others are pearl and moonstone. 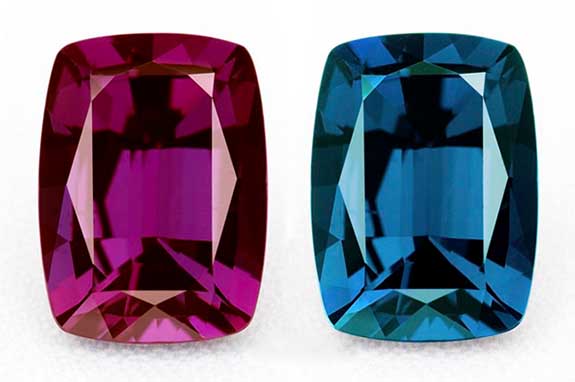 A 2009 gift from Smithsonian benefactor Coralyn Whitney, the beautiful modified cushion cut gemstone exhibits a raspberry color under incandescent light and a teal (green-blue) color when illuminated by daylight. The color-changing property of alexandrite has been attributed to the presence of chromium in the gem’s chemical makeup. The chromium allows the gem to absorb light in the yellow and blue parts of the spectrum.

While this 17.08-carat gem was sourced at the Hematita Mine in Minas Gerais, Brazil, alexandrite was originally discovered in 1830 in the Ural Mountains of Russia. Gem legend states that Finnish mineralogist Nils Gustaf Nordenskiöld (1792-1865) received a mineral sample from Count Lev Alekseevich Perovskii (1792-1856) that seemed very much like an emerald. But when the mineralogist inspected the gem under candlelight, the green gem had turned raspberry red.

The Smithsonian noted that Nordenskiöld had intended to name the new variety of chrysoberyl “diaphanite,” but the Count renamed it “alexandrite” to curry favor with the Russian royal family and Czar Alexander II. (The gem was allegedly discovered on the Czar’s birthday.)

The Whitney Alexandrite is particularly rare because specimens of larger than 2 carats are considered rare and those weighing more than 5 carat are extremely rare. A cut and polished alexandrite of 17.08 carats is virtually unheard of.

In addition to Russia and Brazil, alexandrite has been sourced in Sri Lanka, Tanzania, Madagascar, Zimbabwe, India and Burma. Alexandrite has a hardness rating of 8.5, which makes it suitable for everyday wear.

The color-change gem wasn’t listed on the original modern birthstone list, which was published in 1912 by the American National Retail Jewelers Association, now known as Jewelers of America. The official list was updated in 1952 to add alexandrite, citrine, tourmaline and zircon. In 2002, tanzanite was added as a birthstone for December and, in 2016, spinel joined peridot as a birthstone for August.

In 2013, Whitney provided the National Museum of Natural History with its largest education donation to date: a $13 million gift in support of Q?rius (pronounced “curious”), which established the Coralyn W. Whitney Science Education Center.