Couples are leaving very little to chance when it comes to choosing engagement rings, according to The Knot’s 2019 Jewelry and Engagement Study, which synthesized the buying habits of more than 21,000 engaged or recently married couples. 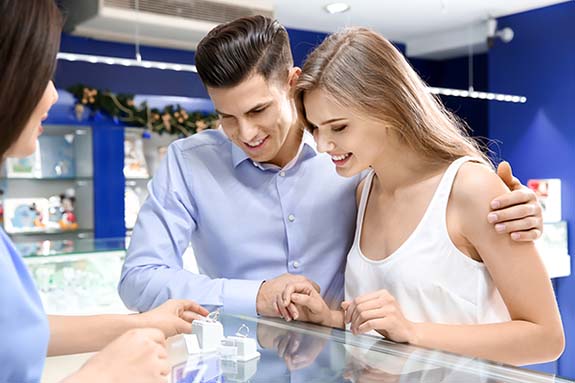 In the study, 7 of 10 “proposees” admit they were “somewhat involved” in selecting or purchasing their engagement ring, and nearly a quarter of that group (23%) say they looked at rings with their partner.

What’s more, 78% of proposers say their significant other dropped hints about their ring preferences and nearly one in 10 proposees even report being present when the ring is selected or purchased.

The Knot reported in 2018 that 37% of engagements take place between November and February, so the popular bridal website celebrated the advent of the 2019-2020 “proposal season” by releasing the results of its extensive survey.

Here’s more of what we learned…

• Proposers prefer to purchase their engagement rings from a local independent retail jeweler (40%). The second-most-popular outlet is a national or regional jewelry chain (30%).

• More than 90% purchase the center stone and setting from the same retailer.

• 7 in 10 proposers report sticking to their budget, while 94% report paying for the ring on their own and 3% say their partner helped contribute.

• Proposers, in general, are less likely to use social media for ring inspiration. Instead, they rely on friends and family (34%), jewelry designer websites (32%), local brick-and-mortar jewelry stores (29%) and online wedding planning resources (22%).

In addition to their purchasing preferences, The Knot also asked couples about how their proposals went down…

• 71% dated for more than two years before getting engaged.

• 87% of engagements are planned ahead of time, while 13% are spontaneous.

• Nearly 90% of proposers ask their partner to marry them with a ring in hand, 87% say the words “will you marry me,” 84% ask on bended knee and 71% ask their partner’s parents for permission before proposing.

• Almost 50% of those proposing believe the proposal was a complete surprise to their partner, while only 33% of proposees say it actually was.

• Directly following the proposal, 75% call friends and family and 72% send them photos of their ring. Additionally, 92% share the news on social media.