Johnkoivulaite, a mineral that changes from deep violet to near colorless when viewed with polarized light, is the newest member of the beryl family, which includes emerald, aquamarine and morganite. 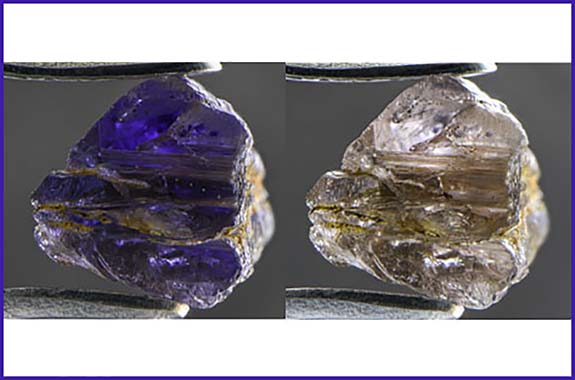 The mineral is named after gemologist and author John Koivula, who is best known for his contributions to inclusion research and photomicrography. 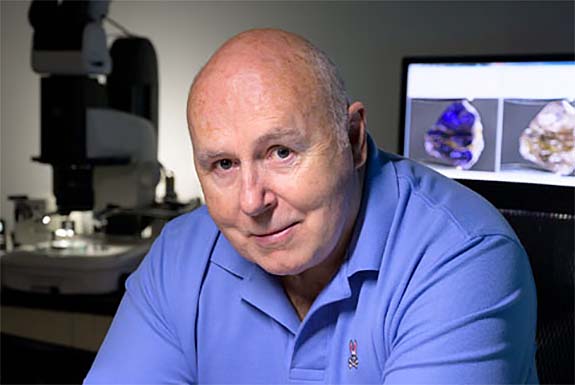 The 1.16-carat crystal, shown above, was discovered in the Mogok Valley of Myanmar by local gemologist Nay Myo and confirmed as a new mineral species by the Gemological Institute of America and the International Mineralogical Association.

“We are privileged to be able to name this mineral after John Koivula who has contributed so much to science and the gem and jewelry industry as a prominent gemologist and innovator in photomicrography,” said Tom Moses, GIA’s executive vice president and chief laboratory and research officer.

The GIA reported that johnkoivulaite has a hardness of 7.5 on the Mohs scale and a hexagonal crystal structure that is very similar to beryl and other members of the beryl group. But, what makes the mineral especially unique is the way it changes from a deep violet to near colorless when subjected to polarized light. This optical phenomenon is called pleochroism.

The johnkoivulaite specimen has found a new home in the GIA museum collection, located at the Institute’s world headquarters in Carlsbad, Calif. Established in 1931, the GIA is recognized as the world’s foremost authority in gemology.

Koivula has more than 40 years of industry experience in research and photomicrography. In 1986, Koivula co-authored with Edward J. Gübelin the immensely popular Photoatlas of Inclusions in Gemstones, followed by two additional volumes. Koivula also wrote The Microworld of Diamonds and co-authored Geologica with Robert Coenraads.