Wearing a bright emerald-colored dress complemented by a turquoise-and-diamond brooch, Queen Elizabeth II addressed the citizens of the UK — and the world — with an optimistic message of hope, resilience and the promise that better days will return. 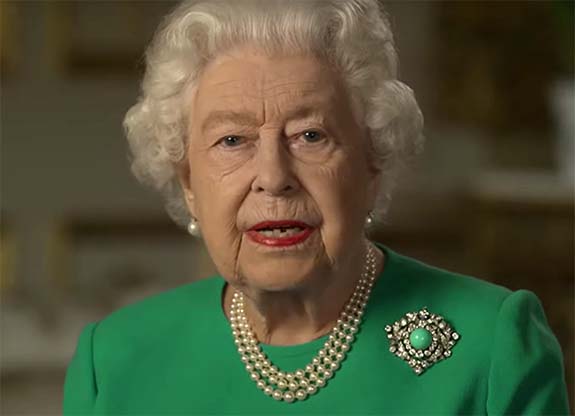 Royal Family watchers believe that Queen Elizabeth accessorized with the rarely seen turquoise brooch because of the rich history and powerful symbolism associated with the piece.

Elizabeth’s grandmother, Queen Mary, received the turquoise brooch in 1893 on the day of her wedding to the Duke of York. It was a gift from her new in-laws, the future King Edward VII and Queen Alexandra. 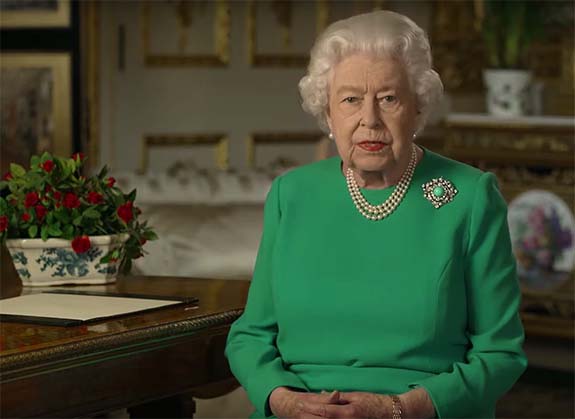 The brooch was passed down to a 26-year-old Elizabeth upon her grandmother’s death in March of 1953. Elizabeth had begun her unprecedented 68-year reign in February of 1952. Interestingly, she did not wear the brooch in public until 2014.

The Queen’s stylist, Angela Kelly, explained in her memoir, The Other Side of the Coin, that the Queen’s outfits are planned months in advance. So we can assume that the ensemble had to be sprinkled with subtext.

Did she believe the turquoise brooch would revive the memory of her grandmother, whose resilience and optimism would help her country recover from the ravages of the First World War? Or was Elizabeth motivated by turquoise’s legendary role as a talisman — a stone of healing, love and protection.

Royal style watcher Elizabeth Holmes wrote on her Instagram that Queen Elizabeth II may have worn the uplifting, bright color to symbolize spring, growth, renewal and a fresh start.

“Together we are tackling this disease,” she said, “and I want to reassure you that if we remain united and resolute, then we will overcome it. I hope in the years to come everyone will be able to take pride in how they responded to this challenge.”