Get Your Rings Ready for Valentine’s Day, the 2nd-Most-Popular Time to Pop the Question

Suitors from coast to coast are breathlessly anticipating Valentine’s Day, the calendar’s second-most-popular time to pop the question. Only Christmas Day sees more proposals, according to WeddingWire’s “Newlywed Report.” 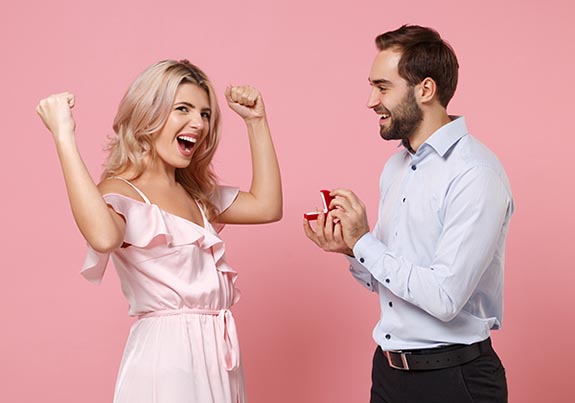 Valentine’s Day marks the end of “engagement season,” that magical time of the year — from the late November to mid-February — when nearly 40% of all marriage proposals take place.

WeddingWire noted that Cupid’s special day is all about love and expressing to that special someone just how much you care. Instead of delivering a bouquet of flowers or a box of chocolate, millions of romantics opt for a proposal and a ring.

Interestingly, in WeddingWire’s 2018 listing of the Top 10 days for marriage proposals, the “Saturday Before Valentine’s Day” rated #10.

The wedding-themed website explained that the popularity of that day may reflect a couple’s desire to celebrate their engagement over a weekend and not necessarily on Valentine’s Day, which — more often than not — comes up during the week and is certainly not a day when most people have off. Popping the question on the weekend prior to Valentine’s Day also preserves the element of surprise.

While February claimed two of the Top 10 spots on Wedding Wire’s list, December is responsible for most of the rest. The site’s 2019 “Newlywed Report” highlighted the fact that 19% of all engagements occurred during that month.

If proposals were distributed equally throughout the year, each month would claim about 8%. And that’s exactly the number attributed to February, March, May and June. July is slightly higher at 9%, while January, April, August and November come in at 7%. Lagging behind are September and October at 6%.

Experts attribute the dramatic December spike to two factors. First, suitors prefer to pop the question in December because they love the spirit of the holiday season. And, second, there’s no better time to propose than when all the family is in town to witness the actual proposal or celebrate with the newly engaged couple afterward.

WeddingWire’s findings are based on data from more than 18,000 newlyweds and is billed as the largest study of today’s wedding planning journey.