Barclay, the adorable four-legged mascot of the St. Louis Blues, recently received a Stanley “Pup” Championship collar — complete with the team’s famous Blue Note logo rendered in sapphires and karat gold. A spokesperson for Purina claimed Barclay is the first dog to ever receive championship jewelry.

Blues executive and Hall of Famer Brett Hull was on hand last week to honor the pup, who was adopted by the team in December of 2018. Many Blues fans and sports writers believe the future service dog played an important role in settling down a team in conflict and leading them to their first Stanley Cup in franchise history.

Prior to Barclay’s arrival, the Blues were a team in turmoil. They were dropping down to the bottom of the standings and their players were literally fighting among themselves.

Liz Miller of the Riverfront Times recounted, “On December 13th, the team adopts Barclay and brings him to practice. No one fights each other, instead opting to play with the dog. On December 14, eventual Conn Smythe winner Ryan O’Reilly wins the team’s next game in overtime — with a shorthanded goal, no less. Is it coincidence that the Blues started to play more like a winning team after Barclay was recruited? We think not, St. Louis.”

The yellow Labrador Retriever puppy soon became an internet sensation, as videos of the five-month-old Barclay slipping across the ice with a stick and puck during a team practice went viral. 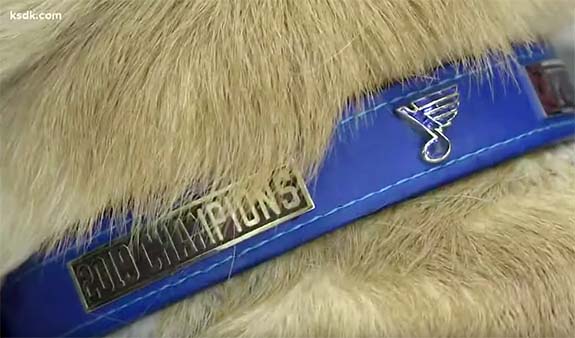 Purina worked with Jostens in preparing the special collar for Barclay. The team’s signature Blue Note — the same one that adorns the players’ championship rings — is affixed to the blue leather collar. 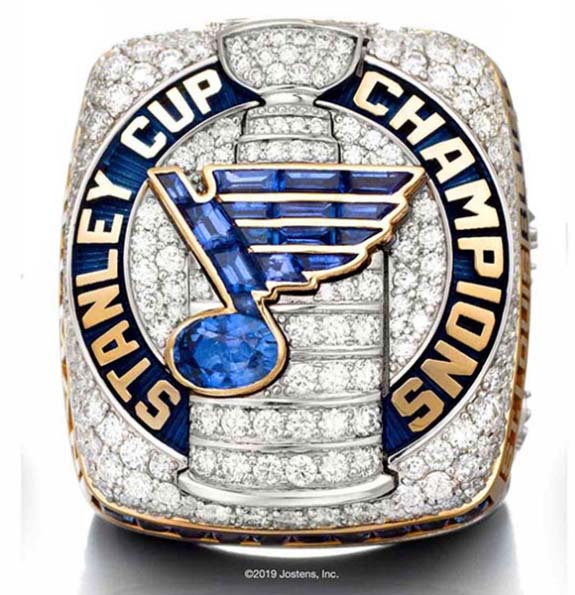 For Jostens’ ring design, the Blue Note logo was rendered with 16 genuine, custom-cut blue sapphires. The number 16 represented the number of victories earned by the Blues on their path to the championship. Jostens reported that each sapphire had to be delicately shaved so each would fit exactly within the logo’s yellow gold outline.

In addition to the Blue Note, the collar also features a “2019 Champions” plaque and a “Purina” insignia.

The celebrity pup, who was voted “Best Team Dog” in the NHL Fan Choice Awards, has his own Instagram page with more than 78,000 followers.

“Woof! My name’s Barclay!” notes the Official Stanley Pup of the @stlouisblues on Instagram. “I’m a good boy who’s training to be a future service dog through @duodogsinc.”