Crafted from 100 grams of gold, the Miami Hurricanes’ “Touchdown Rings 2.0” span eight knuckles and spell out “The Crib” when the two fists are held together. The script words are adorned with orange and green sapphires to match the team’s colors. The rings are set with 829 and 1,096 gems, respectively. 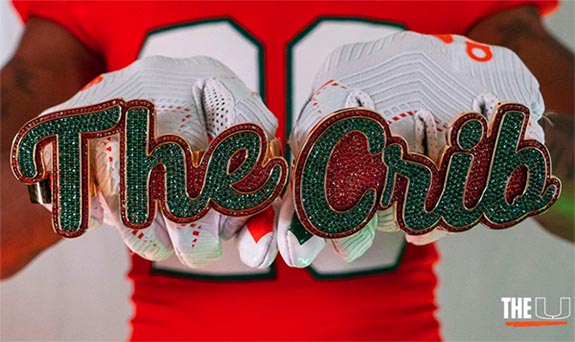 The latest version of the college football team’s celebratory rings was unveiled during the first quarter of the Hurricanes’ Thursday opener against UAB (The University of Alabama at Birmingham).

Down 7-0 and facing a 4th and 1 from their own 34 yard line, running back Cam’Ron Harris took a handoff, busted through the line and scampered untouched for a 66-yard touchdown. The Hurricanes would go on to win 31-14.

For his efforts, Harris earned the honor of being the first Hurricane to wear the over-the-top, double-fisted rings.

“The Crib” represents a nickname for South Florida and is also a way of referring to the end zone, as in, “taking it to the crib.” 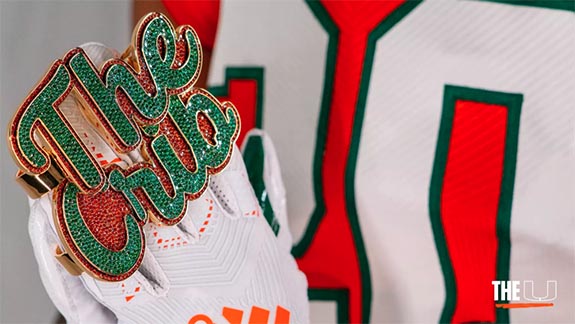 According to a University of Miami press release, the rings were designed by Miami jeweler AJ Machado and took more than three months to complete. He also created an alternate, one-handed version of the piece, with the words “The Crib” stacked.

The Miami Herald reported that coach Manny Diaz believed the Touchdown Rings would encourage his offense to play with the same intensity as his defense.

The offense-focused Touchdown Rings were the answer to the defense-oriented Turnover Chain that was unveiled in 2017. The first incarnation of that chain featured a diamond-encrusted “U” hanging from a Cuban link chain. The 2019 version was a diamond-adorned “305,” also hanging from a Cuban link chain chain (The three-digit number refers to the South Florida area code.)

Defensive players credited with causing a turnover got to wear the special jewelry. The 2020 version of the Turnover Chain remains under wraps because no turnovers were recorded by the Miami defense in their battle with UAB.