Music Friday: He Wears a ‘Plain Gold Ring’ and in Her Heart It Will Never Be Spring

Welcome to Music Friday when we bring you fabulous songs with jewelry, gemstones or precious metals in the lyrics or title. Today, New Zealand songstress Kimbra channels jazz legend Nina Simone in her contemporary rendition of “Plain Gold Ring,” a song about a young woman who is in love with a married man. 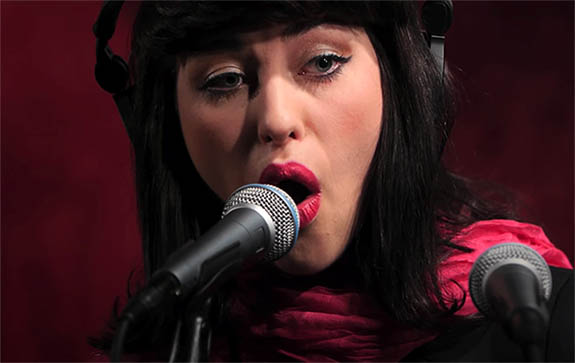 The tune’s emotionally torn protagonist pledges she will love him until the end of time while acknowledging that for as long as he wears that symbol of eternal love, he belongs to another.

She sings, “Plain gold ring has but one thing to say / I’ll remember ’til my dying day / In my heart it will never be spring / Long as he wears a plain gold ring.”

In her live performance video, below, Kimbra utilizes an electronic device called a “phrase sampler” or “looper,” which captures and plays back audio snippets in realtime. The result is a complex, layered sound, where Kimbra seems to be harmonizing with herself.

“Plain Gold Ring” originally appeared on Simone’s Little Girl Blue album in 1958 and made subsequent appearances on the jazz singer’s 1964 live album and 2001 compilation album. During her career, she released more than 40 albums. The artist passed away in 2003 at the age of 70.

Kimbra gave the song a fresh, new interpretation on her debut album, Vows, which was released in 2011. The album charted in seven countries, including a #14 position on the U.S. Billboard 200 chart and a #24 placement on the Canadian Albums chart. It was also nominated for Australian Album of the Year.

The multi-talented singer-songwriter-actress-model grew up in Hamilton, New Zealand, and began writing songs at the age of 10. As a 12-year-old, she sang the New Zealand national anthem in front of a crowd of 27,000 rugby fans. As a 17-year-old in 2007, she won the Juice TV award for Best Breakthrough music video. She was signed to a record deal in 2008 and moved to Australia to pursue a music career.

Please check out the 2012 video of Kimbra performing “Plain Gold Ring” live in the Seattle studio of radio station KEXP. The lyrics are below if you’d like to sing along…

Plain gold ring on his finger he wore
It was where everyone could see
He belonged to someone, but not me
On his hand was a plain gold band

Plain gold ring has a story to tell
It was one that I knew too well
In my heart it will never be spring
Long as he wears a plain gold ring
Oh, oh